Raising Sons: The Need for Discipline 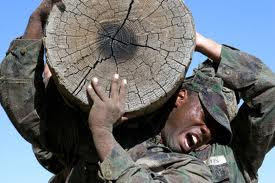 "Boys are confronted with a culture which is hostile to the very idea
of masculinity and which is industriously doing whatever it can to exterminate it.
Boys who, for whatever reason, resist the allurements of masculine laziness
immediately find themselves at war with the culture at large."
-Douglas Wilson, Future Men
Let's face it, young men today, as a whole, are undisciplined. When a young man has gone off the path that God calls him to, we must immediately look to the father of that boy for answers to his waywardness. There are two primary areas of life that young men need to be disciplined in, and failing in either area will lead to certain abandonment of biblical manhood.
The first area is that of inner discipline. Our boys must learn to deal with their inner desire to reject the hard life. Men were created to be builders, to take dominion, to bring order out of chaos; but to do these things takes hard work, and that hard work is what men naturally shy away from. We must teach our boys to embrace their positions, not abandon them.
If a boy looks inward to what is right and wrong, it won't take very long for that boy's life to spiral out of control. A young man's natural temptation will be to abandon biblical manhood in lieu of cultural manhood, which biblically speaking, is no manhood at all. There will times when our boys should enjoy some of the pleasures of this world, but to be ruled by them is never an option; to be consumed by them is not an option either. A fine dinner with good drink is a reward that I enjoy with my wife on occasion, and it's something our boys should look forward to as well!
Rising to the call of biblical manhood is hard work- if it wasn't, more men would achieve what so few have. It takes focus, it takes training, it takes dying to self, it takes vision, it takes courage. The path of least resistance takes none of the above. You eat, you drink, you play games, you get a girl, then repeat the cycle; that's about the sum total of cultural manhood. Completely antithetical to what scripture call men to.
The second area of life that boys need discipline in springboards off the first and is this- they need to be disciplined to reject what the culture is calling them to. They're biblical men, and as such, they should have neither the time nor the inclination to be involved in such a low vocation as that of a cultural man. What's laid out before them from the media; whether it be the music industry, movie industry, or youth industry, must be rejected if they are to rise to the call of a biblical man. Will they have dealings with all of these as they walk through this world? - Absolutely, but they must be disciplined enough to interact with them in a way that brings glory to God.
The culture is always baiting the hook in hopes of bringing down our boys, therefore, it is imperative that we teach our sons to be discerning, to be wise, to be courageous, and to be disciplined. Our boys must know that they are enlisted in the army of the Lord, and as soldiers for Christ, they have a much higher code of conduct than those around them. Let us equip them for good service, and let us pray earnestly that their service is served honorably to the King.
May the LORD give us wisdom as we seek to do His will in the lives of our sons!
I look forward to hearing your thoughts on this subject...
-----------------------------------------------------------------
I wrote an article called "Teach Them to Work," that may interest you as well. Click here to view!
Posted by Steve at 3:09 AM