How To Take a Wife: Random Thoughts from a Simple Guy 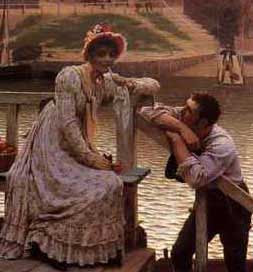 As a father of nine wonderful children, marriage is talked about, read about, and thought about often in my home. Through the years, the LORD has laid upon my heart a blueprint that I hope will help my children all get married in due time. The process will look different for my sons and my daughters, yet, there will be some overlap in how both groups go about getting married, should the LORD allow.

In this post, I'll jot down a few thoughts I have on how my sons, and young men in general, should go about the process of "taking a wife." This isn't an exhaustive list by any means, and as a man gets older, say late twenties and beyond, the process will begin to change as well, so what I hope to do is present some unchanging principles that I've learned over the years.

Stage 1: Prepare Yourself
Young men should be about the business of men at an early age in life. This doesn't exclude having fun or playing xbox, but it does mean that there are limits on how much time is spent being burned in frivolous activities. As you age, say early teen to early twenties, what occupies most of your time should look vastly different from your younger years. What the bible calls men to be should begin forging who you're becoming. Study the lists on qualifications for Elders in passages like 1 Timothy 2, and Titus 1, then set those standards as your standards, and become them!

Again, these are just a sample of what you should think through before you go entering into a life-long covenant with a young lady. You don't want to ask a lady to follow you if you don't know where you're going. Too many men get married before ever considering any of these questions.

I believe children should receive a thoroughly biblical education

I believe God has laid upon the man the role of provider, and that his wife should work at home, helping to advance the vision that the LORD has given to the man for his household.

My ideals have grown over time, and I expect that they'll grow even more in the future. As a first generation believer, coming to some of the decisions I've come to hasn't been easy, or without complications, but I can say this, I'm able to defend why I believe them from a biblical perspective, and you should able too.

Stage 3: Look for a Wife, not a date
When the time comes and you feel like your ready for marriage, and not just a "good time," you'll begin the process of looking for a wife. Let me say this as clearly as I can, "Marriage is for Men, not boys," so if all you want is a date, good time, female companionship with no strings attached, push on. Don't ruin anyone's life because you're not willing to grow up. A woman wants a man who will lead her and take care of her, not a boy she must coddle and hope he changes someday.

The woman you choose as a bride should meet certain biblical standards, not perfectly mind you, because no one does, but at least be moving in that direction. Study the lists in Proverbs 31, along with the lists for Godly women in 1 Timothy 2 and Titus 2 as well, to gain a good understanding of what to look for in a wife.

Stage 4: Speak with her Father, or male protector
I believe in covenant headship, and therefore, I believe when a young man finds a gal he believes could be his wife, he should make his intentions known to her father, before making them known to her. This may sound awkward, but that's only because it flies in the face of how things are done in our culture, and in most Christian circles. If you're a good catch with some bait on the hook, a good father isn't going to rule you out right a way. He's only going to make sure you're marriage material, is fairly close to what his daughter is looking for (he'll know this because he'll know his daughter), and that you won't be wasting his daughter's time, and playing with the strings of her heart.

If you meet a young lady, perhaps one in her mid to late twenties or beyond, and she isn't living with parents, parents aren't alive, and/or there's no male protector in her life, then speak to her Pastor(s). A good pastor will want to protect his sheep, and he'll do what her dad was suppose to do, protect her. Let him know you're desiring marriage and that you wish to approach a lady from his church. Most pastors will welcome the opportunity of helping to facilitate a God-honoring courtship.

Stage 5: Begin the Courtship
There's too many ways to do courtship

, and I'm sure many can meet the biblical standards for purity, pace and perspective, so I'm not going to go into the mechanics of "how" to court, but I will say this; courtship isn't marriage, but neither is courtship dating. You aren't in an unbreakable covenant by courting, but you shouldn't think that this courtship can end at any time, for any reason, either. I think somewhere in the middle is solid ground.


So there you have it, some of my random thoughts on "how to take a wife." If it helps, fine, if not, to each his own. Whatever way you go about finding and taking a wife, make sure you honor the LORD in the process, honor the young lady involved, and maintain your purity. Do this and you shall live, don't, and you shall die a slow and painful death. . . . . at least if my girls are involved!