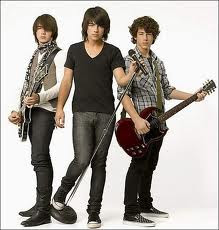 "We live in a feminist and effeminate culture. Because of this, at best,
as a people we are uneasy with masculinity, and with increasing
regularity, whenever it manages to appear somehow, we call for
someone to do something about it." -Douglas Wilson, Future Men
There's a reason tween girls like the Jonas Brothers (pictured above), and it's probably because they look like tween girls themselves. Skinny jeans and mom's haircut is how I heard one speaker at a conference I attended describe their look: not them specifically, but boys who look like them.
Our boys are growing up in a society where being feminine and male are synonymous with one another. To be masculine is seen as being extreme, macho, or even mean to some. Carrying yourself like a man should won't get you very far with the culture we live in. Even in many christian churches, boys looking feminine isn't too abnormal. Parents say it's just a phase, or they'll grow out it, and perhaps they will; but why can't that "phase" be one of biblical masculinity? Why is a phase always sinful, and why do parents accept it?
If your boys are leaning toward the feminine look that's popular for young men, like, skinny jeans and moms haircut, you should be asking yourself some basic questions like:
Who has your son's heart?
Who are his primary influences?
Why isn't his dad who he's trying to emulate? (Assuming dad doesn't wear skinny jeans and have moms haircut!)
And, is your son learning manhood from the word of God?
There are great passages of scripture that every son should learn from if his desire is to become a biblical man. I always tell young men to study the qualifications for Elders and Deacons laid out in 1 Tim. 3: 1-13, and Titus 1: 5-9, then set out to meet that criteria for their lives. One of my favorite verses, 1 Cor. 16:13, says, "Be watchful, stand firm in the faith, act like men, be strong." (emphasis mine) And of course, I tell them to study the life of Christ, who is the ultimate example of manhood, and live a life that's pleasing to Him.
Being masculine has nothing to do with height or weight either, because I know some out there have accused me of saying that all boys should fall into the jock/athlete model, and that's not at all what I'm saying. He shouldn't be a bully either, and he shouldn't punch any guy out who didn't deserve it. A biblical man is one who understands his position in the world and embraces his duty as a man. To abandon his position as a leader, a provider, a protector, or a priest, is to sin against God, and to sin against those he's called to lead.
I've had the pleasure of meeting and getting to know some wonderful examples of young men who have risen above the mediocrity that culture sets forth for young men today, and have seen first hand what the Lord can do with those who truly desire to live Godly in an ungodly world. These young men come from households that take seriously the commandment to "bring up our children in the training and instruction of the Lord." (Eph. 6:4)
It takes work to raise Godly, masculine boys, and there may be some resistance along the way, because after all, their hearts are naturally inclined to resist God's will for their life and embrace sin as the norm; but don't lose heart, God's grace is inexhaustible. I'm a prime example of someone who defied God's will for my life through my teen years and beyond, and today, by His grace, and by His grace alone, I stand here encouraging others to lean on His word. Let's not accept what seems to be the norm out there, rather, let's redefine the norm with the word of God. You won't be popular, and you might even take one for the team from time to time, but that's okay, we need runners on base!
---------------------------------------------------------
(At the end of this post, I have several resources listed that would benefit you with regards to raising sons.)
Posted by Steve at 1:43 AM