In his book, Future Men, Douglas Wilson says, "Manhood is where boyhood should be aimed." With this in mind, I'd like to start my series about Raising Sons with a look at shaping our sons masculine identity. 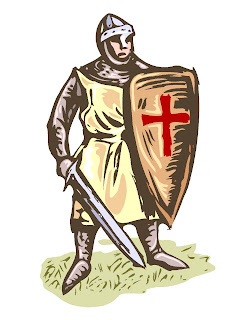 Our boys should be brought up with a different mindset than our daughters; they should see themselves as soldiers for Jesus Christ, ready to fight the Lord's battles when needed, and ready to give their lives for the kingdom if called to do so. This won't happen by chance. If you let culture raise your boys, and you're hoping for good results, you might be waiting a loooong time. For a boy to grow up seeing himself as a Godly, masculine, soldier for the Lord, he's going to need help - he's going to need training.

In Future Men, Wilson talks about five aspects of masculinity that we should cultivate in our sons to help them fulfill their God-given role in the kingdom. They are; lord, husbandmen, savior, sage, and glory-bearer.

Lord: Men were created to rule and have dominion over the earth. They were to reign over all the living creatures, populate the earth, and cultivate the land. Many theologians call this the creation mandate, and look to Gen. 1:26-28 as their biblical authority. Our sons must be taught this creation mandate so they won't fall prey to the feminized culture that exists in our world today, and believe that men and women are no different from one another, children are an option in marriage, and women should look outside of the home for their real happiness and identity.

Husbandmen: Men are to be cultivators of what's around them, not just consumers of what exists. They are to learn how to reproduce, so that when one thing is consumed, another is being planted. Men build gardens and families, not just bridges and buildings. Let your boys play in your garden; teach them the cycles of life, and tell them how that reflects the nature of God.

Savior: There's only One True Savior, and that is, of course, Jesus Christ: but men were created to save things as well, and God placed within us a deep seeded desire to act in saving fashion for many things in this world. When a boys sees a villain in a movie, it's only natural for that boy to want to kill or defeat them. When he see's a dragon, or hears about the Great Dragon in Revelation, it's only natural for boys to want to kill or defeat it as well. They've been given a desire to save that which is less powerful - to save that which cannot save itself. A great way to let your boys cultivate this aspect of masculinity is to let them play with wooden swords and plastic guns when they're small, and as they grow, introduce them to real weapons as their maturity level rises.

Sage: A man is suppose to have wisdom, however, in our culture, wisdom isn't a virtue that many care to attain. Unlike Solomon, who chose wisdom over riches, most men alive would choose riches over wisdom, why, because they weren't raised to know better. We should be instilling in our sons nuggets of wisdom from the early stages of their childhood, and allow them opportunities to implement some decision making skills throughout their early adult lives so we can evaluate how we did. Acquaint your boys with the book of Proverbs, and the other wisdom literature in scripture to begin directing their paths and helping them understand life as God does.

Glory-bearer: "For a man ought not to cover his head, since he is the image and glory of God, but woman is the glory of man." (1 Cor. 11:7) A boy must be taught to act like a man because he bears the image of God. He must not be allowed to express himself in a whiny, powty fashion that detracts from, and neuters, his masculinity. (For more about this click here) He's an image bearer, and with this great endowment comes great responsibility.

If we help our boys with these aspects of masculinity, we'll be well on our way to raising the kind of sons that will not only populate the kingdom of God, but impact it as well!

Doug Wilson's, Future Men,
for anyone given the blessed responsibility of raising sons!

(For more great resources on Raising Sons, go to this post.)