The Decline of the Nuclear Family 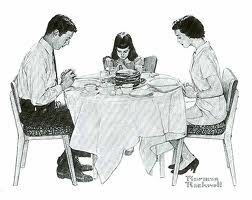 Here's a nice piece on the decline of the traditional (or should I say, Biblical) family, taken from The Resurgence blog, and written by Nick Bogardus.

At the end of article are some links to sermons that every Christian should listen to.

There is a massive shift happening right now in our culture. The ink and pixels that have spilled on the change are markedly hopeless and without answers. To see the tip of the iceberg, we only need to look at the LA Times from last month. The nuclear family is now the minority of households in California.
“New census figures show that the percentage of Californians who live in “nuclear family” households - a married man and a woman raising their children - has dropped again for the last decade, to 23.4% of all households. That represents a 10% decline in 10 years, measured as a percentage of the state’s households. Those households, the Times analysis shows, are being supplanted by a striking spectrum of postmodern living arrangements: same-sex households, unmarried opposite-sex partners, married couples who have no children…new sorts of households - blended families; bands of middle-class singles who live and vacation together; families that were once called “broken” - are increasingly the standard.” LA Times, US Census Data Show California Families Changing, June 22, 2011

What it means to be a family is being re-defined, largely by a tectonic shift in gender roles. In the Wall Street Journal, Kay Hymotitz argued that because women are moving ahead more quickly and in greater numbers in our advanced knowledge economy, that husbands and fathers are now optional. This, she says, has created a situation in which today’s pre-adult male is like an actor in a drama in which he only knows what he shouldn’t say, and in which most men in their 20s hang out in a "novel sort of limbo, a hybrid state of semi-hormonal adolescence and responsible self-reliance."

"Perhaps the things that really need redeeming are the church’s lack of a voice in what it means to be a man or woman."

In Hanna Rosin's article in the The Atlantic entitled “The End of Men,” she paints a nearly identical picture of the alpha-female dominating mute and passive males. “He can be sweet, bitter, nostalgic, or cynical, but he cannot figure out how to be a man. 'We call each other man,’ says Ben Stiller’s character in Greenberg, 'but it’s a joke. It’s like imitating other people.'”
The New York Times described this new "emerging adulthood" as a block box where 20-somethings delay reaching adulthood, often until their 30s.


The traditional cycle seems to have gone off course, as young people remain untethered to romantic partners or to permanent homes, going back to school for lack of better options, traveling, avoiding commitments, competing ferociously for unpaid internships or temporary (and often grueling) Teach for America jobs, forestalling the beginning of adult life.


Don't Focus Just on the External

Of course that is true in the church, only you can replace the Teach for America jobs with short-term missions trips. For all of the time and energy spent on “redeeming the arts”, “redeeming cities”, and everything else we want to attach the word "redeem" to, perhaps the things that really need redeeming are the church’s lack of a voice in what it means to be a man or woman. Exerting so much effort on people’s activities is only addressing externals, symptoms. Chances are if a guy can be a man who loves Jesus, reads his Bible, gets a job, leaves his parent’s house, and loves one woman, then he will also be effective wherever God has called him, be that the arts or in business.
One important thing that needs to be pointed out about this cultural shift described in the articles above is that it is turning us into autonomous individuals. Mrs. Hymotitz even went so far as to say that husbands and fathers are optional in this new economic paradigm. While we might bandage the need for relationship with loosely-defined friendships, these float on the surface of lives marked by selfishly avoiding commitments, being untethered to romantic partners, or permanent homes.

"Perhaps the most loving, most prophetic thing the church can do is to call men in their 20s to love Jesus, read their Bibles, get a job, to leave their parent’s house, and to love one woman."

In the face of the confusion, hopelessness, and lack of any answers from our culture, one of the most radical things the church can call Christians to is back to God’s design for men and women. Men and women were created to cultivate and steward God’s creation—to rule over it as his representatives. But what is often underemphasized is that we were created to do that together. God made men and women in complementary ways to reflect his trinitarian nature, his covenantal love in marriage, and his authority and submission in the church. This ultimately points toward the unity that will exist when Jesus comes back for the bride he loves. All of this is his love towards us.

Perhaps the most loving, most prophetic thing the church can do is to call men in their 20s to love Jesus, read their Bibles, get a job, to leave their parent’s house, and to love one woman—according to the Wall Street Journal, The Atlantic, and the New York Times, no one is doing that.


Again, take the time to listen to these sermons. They were foundational to the life change that occurred in my life when they were first preached, it took me hours to download them on my 'dial-up' connection.

Women and Femininity by Mark Driscoll


Men and Masculinity by Mark Driscoll


For a list of good books on the subjects discussed, click here to view my resource page!