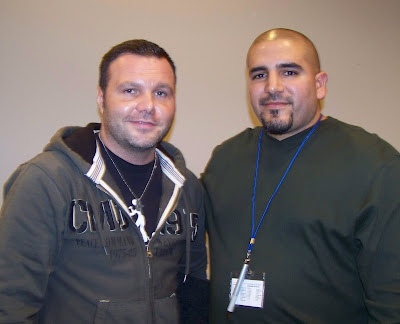 On January 29th and 30th, my wife and I, along with some close friends, headed to Deerfield, IL, for a 2-day church planting conference hosted by Acts 29. Acts 29 is a church planting network that seeks to help equip Men to plant, and re-plant, church planting churches.

The co-founder, and President of A29 is Mark Driscoll. Mark is the Lead Pastor at Mars Hill Church in Seattle, and author of several books. He planted Mars Hill in the fall of 1996, with around 12 people in his home. Today, Mars Hill averages around 7,000 in attendance every Sunday. Truly a work of God!

I became acquainted with Mark Driscoll in the late 90's when my marriage was rocky...my holiness was invisible...and my god was myself. I was driving home from Chicago late one Saturday night, when I tuned in to WYLL to see what they had on. This was a Christian talk station, that occasionally had something on worth listening to. This night would alter the course of my life forever.

The program that was on was a live call-in show called 'Streettalk.'(No longer on) It was hosted by guy named Leif Moi. Leif was a general contractor, Pastor, and host of this program which aired every Saturday from 11pm - 2am Chicago time. Well, Leif happened to be a Pastor at a young, newly planted church in Seattle named...yeah, you guessed it...Mars Hill.

Leif had a co-host come in periodically to help in out or cover for him if he needed the night off, and his co-host's name?...yes again...Mark Driscoll. The two would speak to Men in ways that I didn't think Pastors were allowed to talk. Little did I know Jesus, Paul, the Apostles, and Prophets had been speaking to Men like this for thousands of years, unbeknown to me.

Well, since then, I've spent countless hours being molded, rebuked, corrected, convicted, and whatever else good preaching is suppose to do by Driscoll, and have followed the life of his church and other ministry endeavors with great delight. Ministries like Acts 29 and The Resurgence. Mark is also on the board of the Gospel Coalition, headed up by D.A. Carson and Tim Keller.

The Lord has used Mark in my life to do great and mighty things. And for that, I will forever be thankful. When I spoke with him at the conference, I relayed this message to him and he was as humble as I've ever seen any man be. My wife and I both found Driscoll to be very kind and friendly. He even gave my wife a closed fist 'high-five' when he found out that we have 8 kids. I think he even told her that she 'rocks.'

I thank God that after using Driscoll to draw me close to Christ with much needed hard words, He then led me to a solid church, led by another Pastor named Mark, who would've known, Mark Jobe at New Life Community Church in Chicago. There the Lord brought Men into my life who would disciple me and prepare me for useful service in the kingdom of God. Mark, Mike, Asa, Dave, that would be you. I spent the better part of 12 years at New Life and am forever thankful to those Men who God is using mightily in the Windy City!

So all in all, the conference was extremely insightful, but the highlight of it all was finally, after all these years, getting to meet the General. You know, he even told me that him and Leif have recently talked about doing Streettalk or some form of it again. Well, if they do, I pray that some guy out there screwing up his life and not loving his wife will just happen to tune in on his way home from work, and maybe, just maybe, alter the course of his as well!
Posted by Steve at 3:18 AM