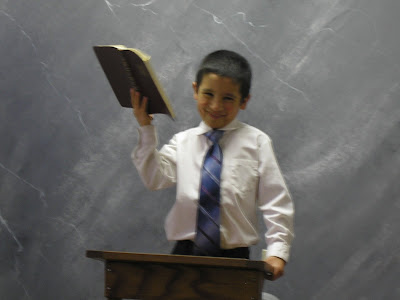 This is my 7 year old son, Stephen Josiah Fuentes. His desire for the past couple of years has been to be a Pastor. Paul wrote in 1 Tim. 3, that if any man desired the position of Overseer, (which is synonymous with Pastor, Elder, or Bishop) that man desired a noble thing.

My goal for Stephen is that he would grow and mature to the point that he meets all of the qualifications laid out by Paul in that passage for an Overseer. I pray that the Lord's mercy and anointing would fall on Stephen for his entire life and that He would give him the desires of his heart.

My job in raising Stephen is to protect his heart from anything that would seek to steal his heart and take him off mission with his Lord. How many a young man has begun his young life with the same desires as my son, only to see his life become a spiritual shipwreck because he had a Father who failed to stand at the gate and fight for him when he was unable to fight for himself.

Please pray that I would fight the good fight for my son, along with my other children who I'll write about soon, and that when all is said and done, many will say that their Pastor, Stephen Josiah, is a mighty Man of God!
Posted by Steve at 2:59 AM