The Silence of the Lambs... 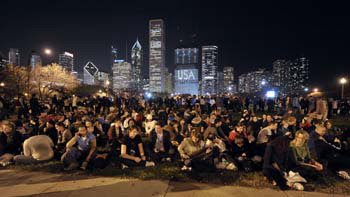 As the masses sat, stood, knelt and waited for Barack Hussein Obama to emerge like Jesus on water Tuesday night after being elected our next President, I couldn't help but think of certain things, people, places and times that I thought may have paralleled this moment in American history.

The names of Jim Jones, David Koresh, Josef Stalin, Adolf Hitler, Fidel Castro, Hugo Chavez, Kim Jung Il and others raced across my mind as I looked at the images and then eventually listened to Obama's acceptance speech.

As Obama spoke and the cameras panned across the crowd gathered at Hutchinson Field in Chicago, you could see the masses soaking in every moment...every word...transfixed by every breath and gesture of their new President. From the family room of my home where I watched this unfold with my family, I couldn't help but feel sorry for the crowd, knowing that they were sold a bag of goods with nothing but empty promises in it. Nothing that will satisfy in the end. Nothing that will bring God's blessing upon this nation, but will rather ensure a further separation due to the bloodshed yet to be unleashed.

Barack has declared, “I have consistently advocated for reproductive choice and will make preserving women’s rights under Roe v. Wade a priority as President.” This means massive bloodshed. This means appointing possibly three or more Supreme Court Justices who would seek to preserve Roe v. Wade. Obama said he would sign an executive order overturning any legislation that in any way prohibits a women's right to any form of abortion. This may be the bloodiest 4-8 year period in American history coming up, and not because of war, the economy, or health care, but because of ideologies made real. Elections have consequences my friends.

Barack has gone as far as stating that he doesn't want his daughter's "punished with a baby" in a crisis pregnancy due to a bad choice. Realize what he's saying; if his daughter made a mistake and got pregnant, then decided she didn't want to keep the child, Barack would idly stand bye and watch his GRANDCHILD be murdered by the hands of a Doctor. Isn't this the opposite of the multi-generational faith and legacy that a man's suppose to leave this earth with according to scripture? Men are implored in scripture to be leaders, providers, teachers, visionaries, warriors and much more. Many many things we are implored to be, but murderers of our own progeny who have yet to be born we are not. This is shameful and evil to say the least.

And for those "so called brothers" who felt like they needed to vote for Obama because of the specialness of the moment, damn you for standing on the side of evil and injustice. God has called you to be a defender of the innocent, not a murderer of them. God has called Christians in general, and men specifically to be defenders of life, liberty, and the gospel. 1 Corinthians 16:13 says, "Be on the alert, stand firm in the faith, act like men, be strong." A vote for Obama defies all four of these biblical injunctions for men. There's no getting around this. You may wash your hands like Pilate, but you cannot wash your souls. To vote for a man who never met a fetus he wouldn't kill or a gay couple he wouldn't bless, defies your calling as a Christ follower.

The only thing Tuesday night lacked was the cyanide-laced kool-aid that I'm sure most people there and around the nation would gladly drink while Blue Oyster Cult's "Don't Fear the Reaper" plays softly in the background!

Was John McCain the answer for America? Hardly, but I'd take my chances with a Patriotic war hero over a naked Marxist any day.

We are Israel of the Old Testament asking for Saul while God implores them not too, and even warns them of the coming destruction should their desires not line up with His. They got King Saul to be sure, and we got Barack. May the gospel lead our nation to repentance...
Posted by Steve at 12:38 PM