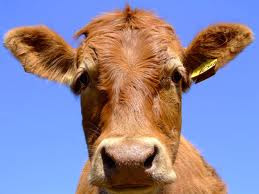 Question:
"Which parts of a cow are good for eating, and which aren't?" "Which liquids produced by a cow are good for drinking, and which aren't?"
Most people would have no problem answering these questions because the answers seem pretty obvious. However, when it comes to other issues where discernment is needed, I see people lacking in this necessary survivor skill. They throw out the baby with the bath water, or take a blanket approach to answering questions, rather than do some critical thinking which might take some time, and might upset a few folks.

I know it's easier not to think, and it's easier to just go along to get along, but is that what Christ calls us to? As believers, we are called to have and implement discernment all the time. We must look at the culture, and be able to discern which aspects of it should be adopted, which should be adapted, and which should be rejected. I learned this three way approach to culture from Ed Stetzer, who has a great ability to discern the times and develop an approach for the gospel in a given setting.

As we move forward in our lives, my hope is that our ability to discern the times we live in, discern movements around us, and discern  crucial areas of life that we must engage, grows deeper and deeper so that we may able to live as Christ did, and wear the coat of Christ in a way that brings Him glory!
Posted by Steve at 5:57 PM