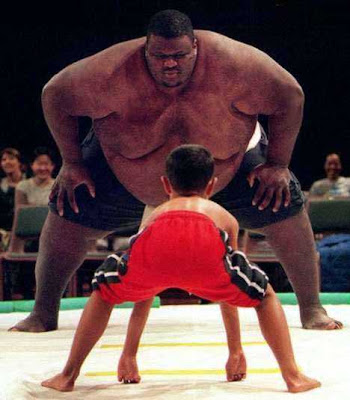 I thought about that as I looked at this picture of the little boy facing the giant Sumo Wrestler. It made me think back to the days when I wasn't walking with the Lord, and how I felt when life threw me a challenge.........(very overwhelmed!)

I didn't have any assurance that my decisions would work out. I didn't know whether I was doing what was best. And I certainly didn't believe there was much hope. It was what it was, and that's just how life is--or so I thought.

Then one day, the Lord opened my eyes to His reality. He allowed me to see Him for who He really is--a loving a caring Father who watches over His children--and to know Him personally, not just know "about" Him theoretically. The gospel--which I had heard growing up--made perfect sense to me for the first time.

This was me for a good portion of my life before the Lord revealed Himself to me and allowed me to hear what He had been telling me my whole life--I love you, I want to forgive you, and I want you to spend eternity with me! I now see that God had been telling me this my whole life, but I wasn't willing, nor wanting, to hear His voice. I believe He's always telling these same things to everybody alive, but like me, not everyone is willing, nor wanting, to hear what He has to say. So, they go on with life, facing insurmountable challenges thinking there isn't a better way, an easier way, and a more certain way, when the whole time God is telling them "There is."

I leave you with these beautiful words that Jesus said to all mankind during His time on earth, and that He still says to us today....