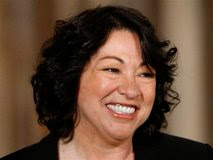 As a Mexican-American, part of me wants to rejoice in the fact that soon, the highest court in the land will better reflect the diversity of the American people. Sonia Sotomayor, President Obama's Supreme Court Nominee, is a girl who has come up through the ranks and I'm sure has made her family proud.

Now, she stands only a few weeks away from becoming the first Hispanic ever to serve as a Supreme Court Justice, and oh how I wish I could rejoice in this, but I can't...

As a Latino Christian, I know that Sonia Sotomayor embraces an ideology that my Bible speaks against. She stands side by side with the radical far Left ideology that President Obama himself embraces, and because of this, I can't say this is a good day for the Hispanic community.

Some in my community, or might I say, most, will see this as a great moment to celebrate. Just as most in the African-American community saw the election of Mr. Obama as a great moment to celebrate. They see our country advancing past ethnic divides and moving toward a more inclusive future that will open doors to our children and will hopefully put to rest the bigotry and racism that has besmirched our Nation for far too long. And to this, I rejoice with you. No one wants to see these sins carry on into to the future, No One!

To see our Nation move forward in the area of racial diversity and racial inclusiveness is a very worthy goal that I desperately want to see occur as well. But at what cost? The price we pay as Americans to move forward an agenda of "inclusiveness" and "diversity" should never come at the expense of righteousness. It shouldn't come at the expense of Godliness, or morality either.

There are things more important than having our first Hispanic Supreme Court Justice, at least in my eyes, and one of those would be wisdom. Another, holiness. And yet another, integrity. These traits come through the fear of the Lord. The word of God declares that "The fear of the Lord is the beginning of wisdom." The kind of people we should hope to have leading our land are God fearing people who evidence their faith through good works and and a biblical worldview.

When one doesn't fear the Lord, there isn't anything that's sacred. Whether it be an unborn child created in the image of God, or the sanctity of marriage between a Man and a Woman

. If God isn't feared, everything is subjective. If God's moral law isn't held as holy, all laws become subjective and arbitrary. This is where I believe we're headed as a Nation.

If I sound pessimistic, I am. In an earthly sense. If it weren't for the gospel of Jesus Christ, I'd have no reason for hope at all. All would be doom and gloom. Perhaps I'd have my own conservative talk show to lament for the next 8 years!

Yet, I am hopeful, because the gospel cannot be legislated out of our Nation. It cannot be voted on by the American people. It cannot be removed from power by the President. Nor can it be made powerless by Godless human beings.

So, let us renew our hope, and strengthen our witness. If God could change Judea and Samaria with twelve Spirit filled Men, surely He can change America with several million who call Christ Lord!
Posted by Steve at 2:00 AM