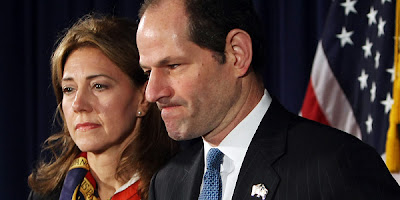 Unless you've been on a media fast for the last few weeks, I'm sure you're very familiar with the recent story of former Governor Eliot Spitzer (left with wife), and his adulterous escapades with a call-girl named Ashley Alexandra Dupre (seen below), that he paid $4,300.00 for.

The story has rocked the political world, and I'm sure Eliot's world as well. He resigned from the Governorship last week as a man in disgrace, and has sought refuge in order to begin the process of rebuilding his life, marriage, and family.

I've heard lots of talk radio covering the story and some jokes from comedians and late night show hosts like Leno and Letterman. They do have much to poke at, with Spitzer paying from business accounts that were easily traced back to him, moving large sums of money from his personal accounts to the accounts belonging to the call-girls company. He didn't cover his tracks well, that's for sure.

But as I've thought about this story, I can't help but think about the tons of men out there who indulge in the same behavior as Eliot Spitzer, but haven't been caught yet. Or so they think!

Then there are the ones who have been caught. Guys like...
My point in mentioning these guys isn't to throw them under the bus along with Spitzer; but rather to remind Men of just how common these type of affairs occur. And I'm sure that some guys reading this can recall their own adulterous affairs of years past, or current, that their wives may or may not know about.

Men, you know your own frailty apart from the grace of God as well as I do. You know your thought life, or should I say lust life, better than anyone but God. So how is it that we can take someone like Spitzer and point our fingers at him as if we're any better a person than he is? The words of Jesus come to mind when he said, "You have heard it said, 'Do not commit adultery,' but I tell you that any man who lusts for a woman has committed adultery with her already in his heart." Anyone innocent?

What this story has made me do most of all is to thank God for His grace in my life. A grace that is redemptive, restorative, and rythmatic. God's grace through Jesus can redeem the worst of situations, and worst of offenders. Christ death at Calvary is sufficient to satisfy any demand for atonement by the Father for any sins committed by mankind.

God's grace also brings rhythm back to a shattered and broken world. God created this world in the beginning with rhythm and structure that was completely beautiful, and his grace is in the process of restoring all things back to himself.

I'm hoping that the Spitzer family has people around them who know the word of God well enough to help bring healing to their family. After all, where can you go from here if you're Mrs. Spitzer, and you don't know Christ and His suffering? How does Eliot begin to rebuild without knowing what he's building toward? They need God grace. They need it to bring them to repentance (him at least for this affair). They need to show them how to forgive. They need it to give them a picture of what a marriage is suppose to look like. And they need it to allow them to begin the process of rebuilding.

Then there's Ashley Dupre who comes from a broken home in Jersey. I wonder if she's been seeking an identity that her Dad may have never given her? Would things have turned out differently for her if her Dad had loved and discipled her like he was suppose too. Does she know Christ? I'm no longer so willing to say that people who sin this grievously don't know him, after seeing what people who claim to know him get caught up in. I'm hoping someone can bring the gospel to her that will help her walk away from this lifestyle and into a life of redemption and beauty!

So Men, let us all remain sober minded about our humanity and let us give God glory for his grace functioning in our lives. For without it, we are left without hope in this world and the next!
Posted by Steve at 8:12 PM