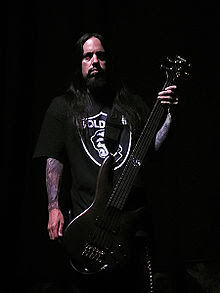 Read an article the other day about how Reginald Arvizu, better known as 'Fieldy' from the band Korn, had found God and repented of his past behavior and sins to his fellow band members. Fieldy is the second member of Korn to become a Christian. The first was Brian 'Head' Welch. You can read about his conversion here.

If Fieldy's repentance is real, and from what I've read it seems to be, I say Amen! Imagine the impact someone with his connections could have on the music industry. Think of the witnessing opportunities he could have within the crowd he runs with.

In the article cited, he said his Dad, a born-again Christian, had only one with on his death bed, and that was for his son to find God. And according to the facts, he was born-again the night his father passed away.

I'm sure you could point to things in his life, or Welch's, that may provoke some thought of "That isn't right." But be careful, because they might do the same to you. These guys coming to Christ from the industry they're in reminds me of the passage in Mark 2 when Jesus was having lunch with the "sinners and tax collectors," and told the Pharisee's, who hated to see him with such dregs of society, that he came not to call the righteous to repentance, but sinners. And according to scripture, these guys are 'sinners,' and me too!

Other notables who've gotten saved, according to their testimony and not my opinion, are: Deion Sanders, MC Hammer, RUN (of RUN DMC), Bono, and I'm sure you can name some.

My hope is that we see and hear about more stories of repentance and faith in Chirst as the years go on within the music industry, sports industry, hollywood, etc. These industries may be hard to conquer, but the gospel is powerful. Jesus said; "I will build my kingdom, and not even the gates of hell will prevail." If they're called, they'll get saved. Glory to God!

15 Later, Levi invited Jesus and his disciples to his home as dinner guests, along with many tax collectors and other disreputable sinners. (There were many people of this kind among Jesus’ followers.) 16 But when the teachers of religious law who were Pharisees saw him eating with tax collectors and other sinners, they asked his disciples, “Why does he eat with such scum?”

17 When Jesus heard this, he told them, “Healthy people don’t need a doctor—sick people do. I have come to call not those who think they are righteous, but those who know they are sinners.” - Mark 2: 15-17