My Kingdom Is Not of This World...

So where do we go from here? As a nation? As a people? As Christians? As Americans?

Much has been written about John McCain's pick for Vice-President, Sarah Palin. She's the current Governor of Alaska, card carrying member of the NRA, Hunter, Fisher(woman), Wife, and mother of five. To say she's busy is an understatement. Much like my own wife!

Much of what I've read and heard as been either high-praise or great disappointment, with a little "not sure yet." What has surprised me however is that many Christians who I admire and respect are viewing this election and McCain's pick from the same paradigm as the Non-Christians. Should we be doing this? Is there a better alternative view to understanding this election and our current political landscape? I think so.

As Christians let us always remember our dual citizenship. We are simultaneously citizens of the United States of America and citizens of the Kingdom of God. So the big "E" on the eye chart is whether or not the Kingdom of God exists within the realm of this world or a world to come? How you answer this question I believe will determine how you vote in this election. And remember, I'm addressing Christians here, not all people in general.

The way I see it, American Christians have an obligation to vote because God determined to 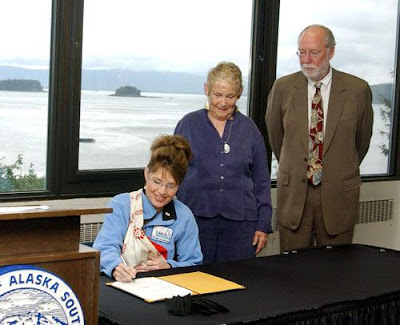 allow us to be born and live in such a time as this. As Adrian Rogers once said, "It is inconceivable to think that God would establish government and then tell His people to stay away from it." I agree, and so should you. Remember God's sovereignty, He knew who would be on the two tickets come this November when it's time for His people to cast their votes. God isn't surprised by McCain's pick like we were. A good Calvinist would say God chose Sarah Palin and not John McCain. Just like God chose Deborah to be Prophetess and Mother over Israel to bring shame to a man named Barak who refused to lead the nation to battle without her joining him. Hmmm, isn't there a Barak in today's picture as well?

So in determining your choice come this Novemeber keep some things in mind as you go to the voting booth:
For some good thoughts to consider, read Doug Wilson's article on this subject that reminded me of the things I wrote about. He's always a good voice in the wilderness!
Posted by Steve at 12:29 PM